Play as Jazzchan, the idol whose music mesmerizes the masses, and compete against Bluessom in an idol fight of which the world has never heard before! Defend yourself and turn Bluessom’s fans against her with the power of your music (and fists). She’ll do the same, so keep going until one of you goes down. The more fans you have, the worse it’ll be for your rival!

Results of the Game Jam: 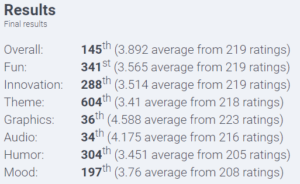 You can listen to the soundtrack here: